About Earwig Bugs in Your Home

Most of us have experienced an earwig sauntering across the carpet that we’re sitting on. Even though earwigs aren’t major disease-carrying bugs, and aren’t poisonous, it’s unnerving to see them invading our homes. 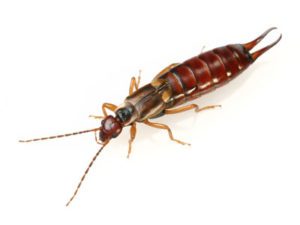 Adults are usually about 10-15 mm and dark brown in color. They have two sets of wings, which they very rarely use. However, the most striking aspect of most earwigs are their large forceps (or pincers), which can look very threatening.

Something surprising about earwigs is that they are fiercely protective of their young. Unlike most insects, which leave eggs and newly-hatched larvae to fend for themselves, earwig mothers will guard their eggs until they hatch, and guard the larvae until they shed.

Earwigs love damp places which are cooler than most insects prefer. For the most part, their diet is made up of vegetation (both alive and rotting.) However, some species are predatory, and they live off of smaller insects.

Because of their large pincers, many people assume that earwigs are dangerous, liable to pinch and bite. However, earwigs are relatively harmless creatures. They have no venom, and while those pincers can be used defensively, their main purpose is in competition with other earwigs.

Earwigs get their name from the (surprisingly popular) myth that their preferred nesting ground is in human ears. Stories have circulated since ancient times that earwigs love to burrow into our ears and lay their eggs. While it is true that earwigs like moist places, they’re no more likely to venture into a human ear than any other insect. The biggest problem that earwigs will present for your home is as a threat to your garden. That being said, it’s still not fun to see the little guys crawling around indoors.

Earwigs in your home rarely constitute an “infestation” as they don’t congregate in large numbers indoors, or pose the health and safety threat that other insects do. However, there are still ways to prevent them from wandering into your home.

Because their preferred habitat is damp wood, it’s smart to survey your home for drips and leaks. Check over undisturbed areas that are close to garbage or vegetation. Check your irrigation systems and rain gutters to make sure that moisture is being routed away from your home’s foundations.

In order to prevent earwigs in your home, we can evaluate the area and direct you to make changes that will keep them from getting in. Perimeter insecticides can deter earwigs from doors and windows and other entry points into your home.

Are you experiencing a problem with earwigs in your home? Contact us today!